During the final months of the Spring 2021 semester, alarm bells were rung throughout Niagara Falls and within the campus community, warning that AL Asphalt planned to buy a plot of land near the Witmer entrance of Niagara University. After a failed attempt to set up shop in the Town of Hamburg, the company eyed the Town of Niagara as the focus of their following efforts, wrongfully assuming that battle would be easily won.

Asphalt plants pose a serious threat to their surrounding environment and hold the potential to significantly and adversely affect the health of the beings that live there. The Center of Health, Environment, & Justice, an organization founded by Love Canal activist and Niagara Falls native Lois Gibbs, conducted a hazard review of these plants and found that the emissions produced, specifically the carcinogenic polycyclic aromatic hydrocarbons (PAHs), already are at fault for affecting the reproductive capabilities, causing dangerous external and internal reactions, and congenital disabilities within animals. As a result, they hold the potential to have similar effects on humans, as well. In addition to the negative environmental and health consequences of asphalt plants, the aesthetic they produce is one of dark smog, massive machinery, and nauseating, toxic smells - all of which are known to reduce the economic appeal of the surrounding homes and the standard of life for the residents who reside there.

With the chosen site roughly 300 yards from the Niagara University student apartments, this issue became an immediate concern for the University and its student activists. Below is a map illustrating the plot of land AL Asphalt had chosen and its proximity to Niagara University. 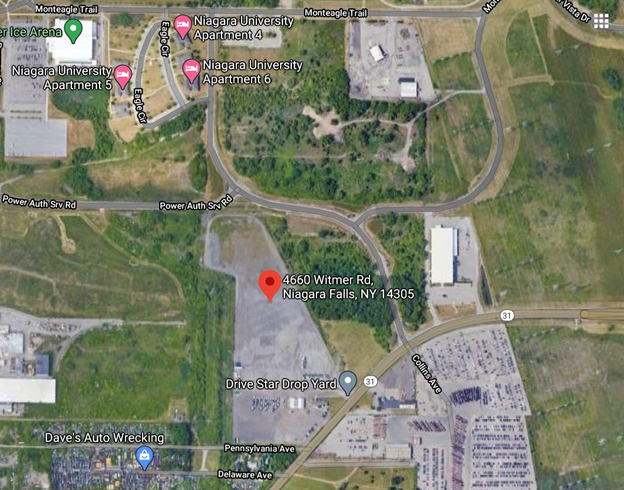 As one can see, the new plant would reside in the University's backyard; however, the damage caused by its emissions would fail to respect the same physical boundaries. The pollutants would be free to seep through the air and infect the plant's neighboring areas. To respond to this looming threat, the students from the Justice House Program and the aligning class, Justice in Action, joined together to challenge the efforts of AL Asphalt. They did so through on- and off-campus initiatives, social media campaigns, and by demonstrating a united front - clarifying that these NU students stand together in their active disapproval of an asphalt plant setting up shop within Niagara Falls, NY.

On April 6th, Niagara University Student, Ellen Rajnisz, spoke on behalf of the student group to the Council Members of the Town of Niagara. They were meeting that day to determine the fate of AL Asphalt in Niagara Falls. Below is a quote from Rajnisz's statement:

"We as a community demand that AL Asphalt and the Town of Niagara consider these implications before, once again, prioritizing profit and industrialization over the health of residents, both current and future. As we collect support behind this initiative, we also stress that this issue is not isolated to one event or project. If this project fails, we will not celebrate and return to passivity. Though we speak today to strongly discourage one proposed plant, rest assured this is one moment in a much larger movement. We will rally against future proposals that seek to further damage the local environment and the communities that live here."

Thanks to the students' efforts and those of residents from the Niagara Residents Against the Asphalt Plant, the Town of Niagara rejected AL Asphalt's permit request. Though undeniably a victory - for now, the efforts of the NU student activists and other local groups to deter new environmental hazards within their community are hardly ceasing. To quote Rajnisz, "rest assured this is one moment in a much larger movement."